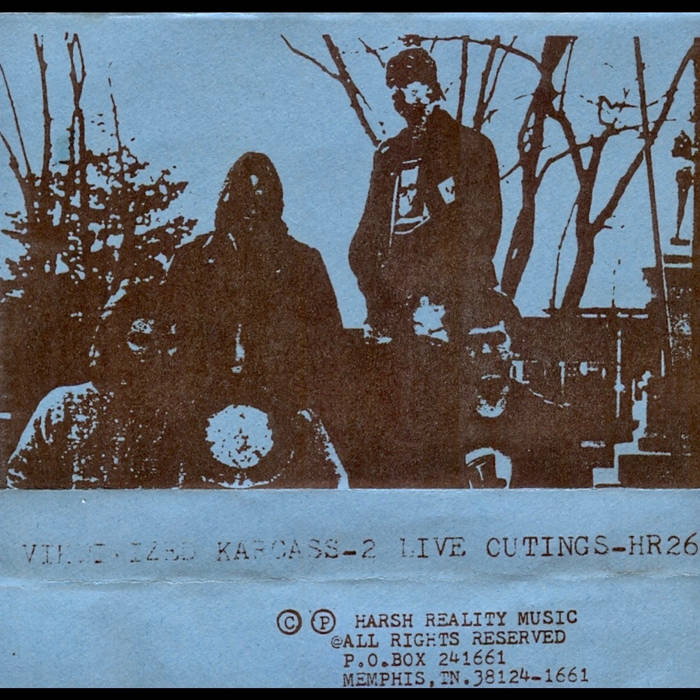 Ben Harris This is a sneering contemptuous revenant of a record. Really glad I read that Doug Walker article written by John Morrison on Bandcamp daily, otherwise I might of missed this entirely. It's a pity that tracks ten to seventeen (the entirety of side B) leans so heavily into the righthand speaker. Favorite track: Outside.

Visit a special web page containing the original cassette cover, a review by Jerry Kranitz, an interview with Chris Phinney, and a Bandcamp audio player:
www.haltapes.com/hr026-two-live-outings.html

Side A:
Humboldt, TN. Youth Center
Announcement
Sound Check
Self Pride
Outside
Sona
Night Creatures
Heartbeat
March Of The Blind
Freakin' Out

This archival reissue of 2 Live Outings by Viktimized Karcass was created with the full cooperation, involvement and authorization of Harsh Reality Music label owner Chris Phinney.

2 Live Outings is best experienced as side-long listening tracks and we have included audio files of the complete sides of the cassette so that you can hear 2 Live Outings just like you would have in 1986. Separation into individual tracks might not be perfect. Enjoy!