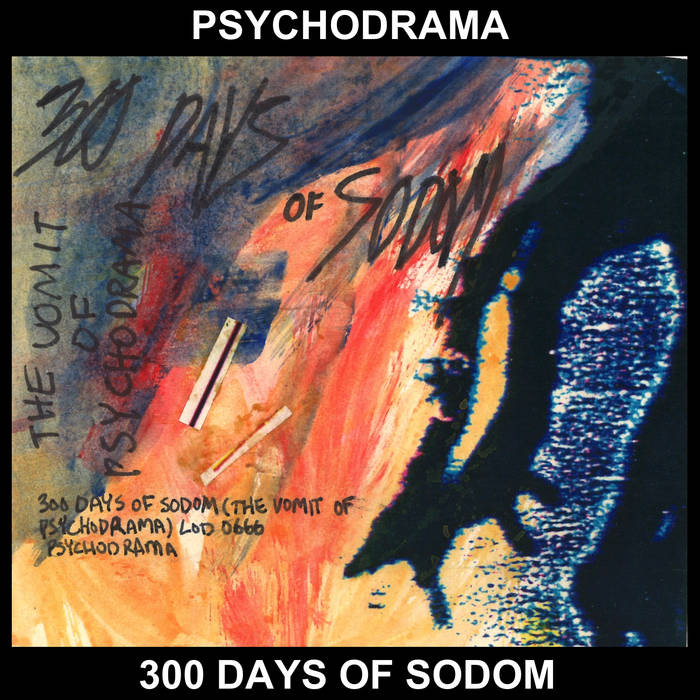 Psychodrama was a Washington, D.C. area experimental music group formed in late 1981 by Brett Kerby, Leslie Singer, and Rob Lippert. "300 Days Of Sodom" was the first cassette release by Psychodrama, originally issued in 1982.
Also included here are Leslie Singer's earliest solo recordings (before Girls On Fire), and one track by From Far Away, Beauty? — the group that Brett and Leslie were members of before they formed Psychodrama.

You are invited to visit a special archival page dedicated to the first incarnation of Psychodrama (late 1981 until November 1982):
www.haltapes.com/psychodrama.html
— Extensive notes on "300 Days Of Sodom" composed by Leslie Singer, including interpretations of the lyrics and the ideas behind the songs.
— Original advertisements for "300 Days Of Sodom", Psychodrama gig posters, a Psychodrama zine, recollections by Singer and other people about Psychodrama's infamous performances in 1982, reviews, rare photos, and much more.

This archival reissue of "300 Days Of Sodom (Enhanced)", including a track by From Far Away, Beauty?, was authorized by Psychodrama and FFAB member Leslie Singer.

Tracks from "300 Days Of Sodom" by Psychodrama were transcribed by Hal McGee from Al Margolis' personal copy of the cassette that was sent to Al by Brett Kerby in the mid-1980s. Thanks, Al!
All 11 songs were dubbed onto one side of a 60-minute cassette.

Leslie Singer and Rob Lippert have confirmed that this is the version of "300 Days Of Sodom" that was used during Leslie's time in the band.

According to Rob Lippert, after Leslie left Psychodrama, Brett Kerby later kept on adding supplementary audio materials to these original 27 minutes until it expanded to a C-90.