A Fear Of Staircases 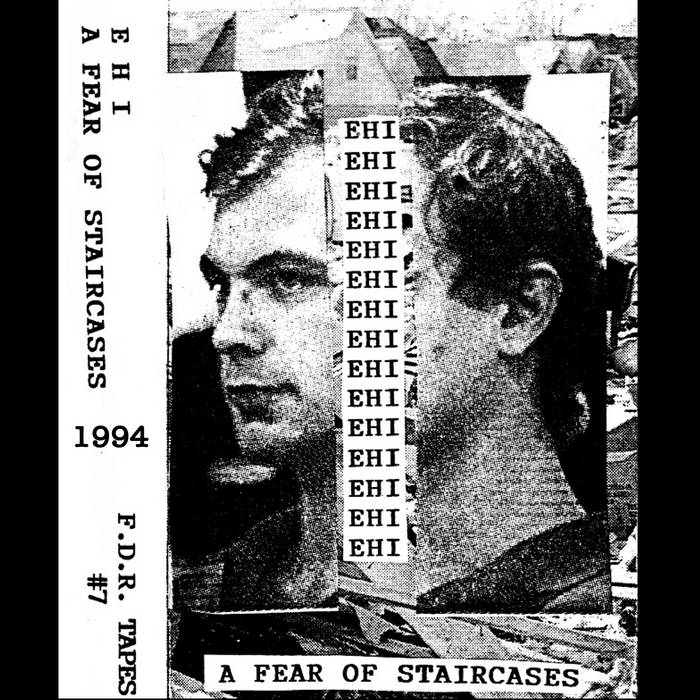 E H I
A Fear Of Staircases
originally released on cassette in 1994
on the F.D.R. Tapes label
F.D.R. Tapes #7
Des Moines, Iowa, USA

The F.D.R. Tapes label (later F.D.R. Recordings) was a classic label operated by Brian Noring of Des Moines, Iowa from 1994 through 2008. During that time Noring released 190 cassettes and CDRs, which included solo and collaborative works, as well as compilations. F.D.R. was every bit as essential in the 1990s wave of cassette labels as any label from the previous decade.

On his F.D.R. Recordings list on the Rate Your Music site Brian Noring wrote this about A Fear Of Staircases:
"The title is a reference to a nasty fall I took from the top of our staircase. 17 pieces most in the three and four minute range, but constructed from hours of actual recording and layering techniques. Format switches from keyboard pieces, tape manipulations, more experimental pieces and more often than not - a combination of all the above. Although I was listening to plenty of noise music at the time, this tape still reflects my interests in old industrial projects with just about every track having a beat of some kind. Things were soon to change. One of FDR's most distributed titles."
rateyourmusic.com/list/bnoring/f_d_r__recordings/

The audio transcriptions were created from Copy #49 of A Fear Of Staircases.

Individual tracks are 24-bit transcriptions. Track separations might not be perfect.

Included are 16-bit transcriptions of the entire tape sides so that you can experience A Fear Of Staircases as side-long listening experiences just like you would have in 1994.

other F.D.R. Tapes releases on Cassette Art Classics at Bandcamp:

E H I - P Is For Proper
cassetteartclassics.bandcamp.com/album/p-is-for-proper-1994