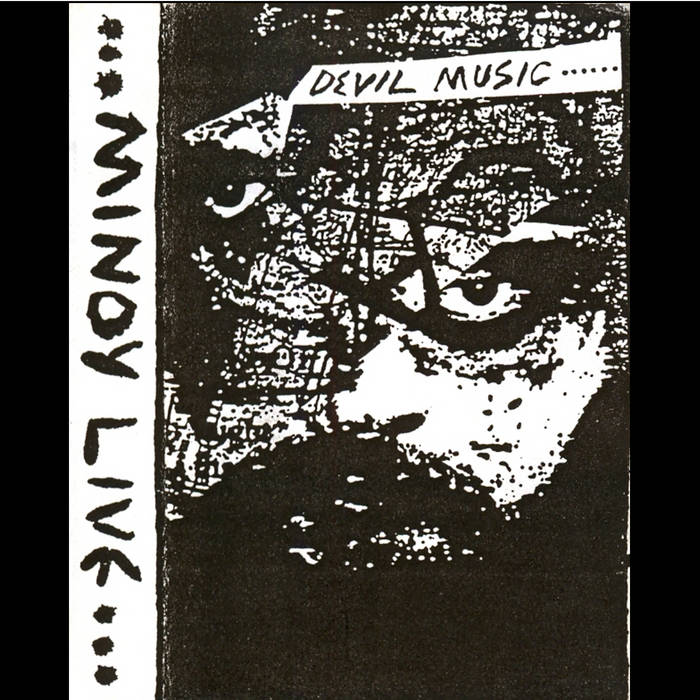 Side One:
A. The Flavor Of Acid On Ice (a dance in the manner of Japanese Butoh)
B. Me And My Shadow

Side Two:
Phil Runs The Voodoo Down

Actually the first concert I ever performed turned into a controversy. It was in January 1988, a live collaboration with obscure experimental artist, Minóy. It was one of the few concerts he had ever done, he may have performed in L.A. a time or two and on Das' radio program in Santa Cruz at one point or another. With his fragile personality complex (he suffered from anxiety and also depression) it took some cajoling just to get Minóy to perform a concert at all, and I (mistakenly) assured him that our music would go over well on the university campus.

We performed the concert in the Student Pub at Cal State University, San Bernardino. We were determined to perform improvisationally, but had a loosely defined strategy in place. Minóy brought an amp, guitar and microphone. I had my own amp, analog synths, shortwave radio, different effects pedals and a TV tuned to static. We agreed that for the first composition I would create a drone that would rise in volume for approximately 15 minutes and he would do some of his trademark wailing vocals on top of that. So, we began, I was using the shortwave radio and a couple of my analog synths running through the old Echo-Plus pedals. Minóy had a colorful cloth that he had draped over his head and shoulders, his nails were painted black, you couldn't see his face at all, he was doing a sort of Butoh-inspired strange, slow dance, while howling some anguished mashup of "Somewhere Over The Rainbow" and, ironically, "I Get By (With A Little Help From My Friends").

Well, about 10 minutes into the performance, the volume abruptly went off, and it was clear the sound man had pulled the plug on the pub's sound system. Minóy sort of sat down onstage and put his hands to his head and I ran off the stage to see what the hell was happening!? The pub manager tells me that customers in the pub were complaining and they had to turn us off because of it. But it soon came out that a group of Campus Crusaders, of which the manager was one, actually felt we were performing a satanic ritual! I went back onstage and told Minóy about the ludicrous reason we were being shut down. We both had our own amps, and in an obvious act of defiance we cranked the amps up and continued playing, Minóy making really obscene noises and racket on his guitar and i was, I think, playing a Moog, and we did this until the campus security came, shut us down and escorted us off the campus.

Here are some excerpts from the college newspaper, "The Chronicle", that reported on this February 3, 1988 (note the discrepancy in the official story re. the manager "asking" us to stop first):

"Last Wednesday in the Pub, student union night manager, Mark Hoeg, interrupted Minóy during their music set for the evening, and asked them to stop playing. When they didn't he unplugged their sound system. Hoeg felt he did what he was supposed to according to his job description. 'I had been asked by several people to get them out of the pub. People were getting upset and I was afraid something would happen', he said.

Some students claimed this was a form of censorship while others felt Hoeg did the right thing because the majority of the audience wasn't enjoying the music. After a heated discussion between Hoeg and the two member group, campus security was called.

(A) Pub employee... felt they should have been turned off... 'No, I don't agree with censorship, but what Mark did wasn't a form of censorship. The audience reaction was bad', he said, 'They (the audience) wanted him to do it. I can relate to art, but not to this, there is no relationship to art in their music, it's intimidating.'

Phillip, who performs with Minóy, (said) 'Our music is harsh, we're different, but we don't intend to it to be associated with satanism... as some of the students feel it is.'

Letters to the editor followed. Here are a couple of quotes:

"The cup of hypocrisy runneth over. First, we have Jello Biafra claiming to be a crusader against "censorship in the music industry", now we have Minóy complaining they can't hold satanic rituals in public."

"What transpired at the pub show Wednesday night proved that the local Aryan frat yuppies have little use for anything which doesn't resemble the skinny-tie wimpola pop bands they're used to. The student union manager, goaded by disgruntled patrons, showed his true colors as a power crazed jackal and literally pulled the plug (or had it done) IN THE MIDDLE OF MINOY'S PERFORMANCE! he then hid from criticism behind the campus police. While the music was certainly cacophonous, hardly 'danceable', and perhaps a little self-indulgent, it wasn't any louder than (any of the) other campus favorites that have played the pub in the past. And it certainly wasn't devil music as one deranged young man suggested. In short, the manager's actions constitute nothing less than de facto censorship of the same type Jello Biafra warned students about when he spoke here."