by Girls On Fire 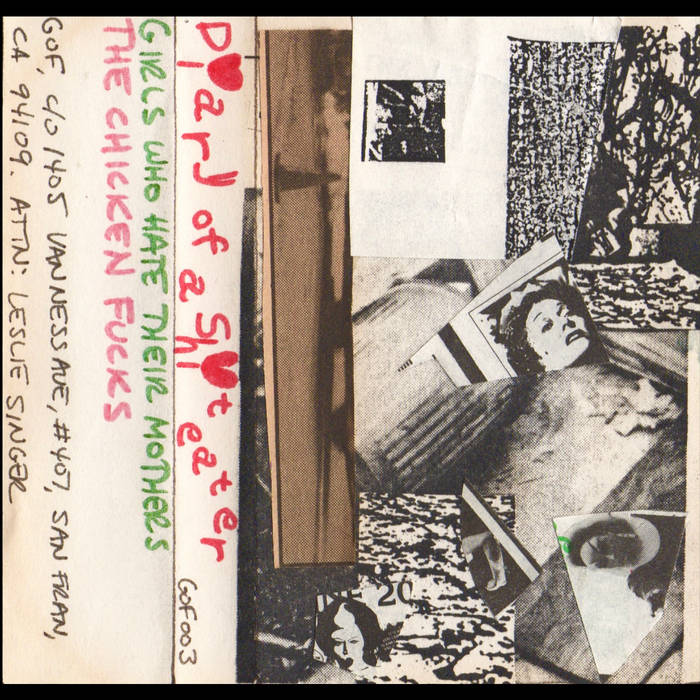 visit a special info page about Diary of a Shiteater and see additional artwork and liner notes by Leslie Singer:
www.haltapes.com/diary-of-a-shiteater.html

Diary of a Shiteater is a volcanic bubble of cut up samples and songs by me, Girls on Fire, with my old bandmates, who were then in the second incarnation of Psychodrama (Brett, Rob and Mark), plus snippets by other artistes and found audio —— All put through the metaphorical meat grinder with audio levels pushed into the red even more than The Velvets' White Light/White Heat, and blown out speakers crackling with distortion. Very demonic. Like a horror movie version of the documentation of the John Cage/David Tudor performance of Variations IV recorded at the Feigen/Palmer Gallery in 1963; with the distorted voices and art opening/party conversation.

Brett and Rob would send me cassette tapes and I interspersed them with the stuff I was coming up with. I don't think that I sent them the tape in advance to review or approve before it went out into the world. I also don't remember their reactions to the tape either. However, I do think that Brett came up with the name "The Chicken Fucks" and I definitely remember coming up with the name "Girls Who Hate Their Mothers". I think that we went with the different names because both of those names seemed more even more aggressive to us like the cut-up process/sounds on the tape than even Psychodrama or Girls on Fire.

album cover artwork from Little Fyodor's personal copy of the cassette that he received directly from Leslie in the 1980s.