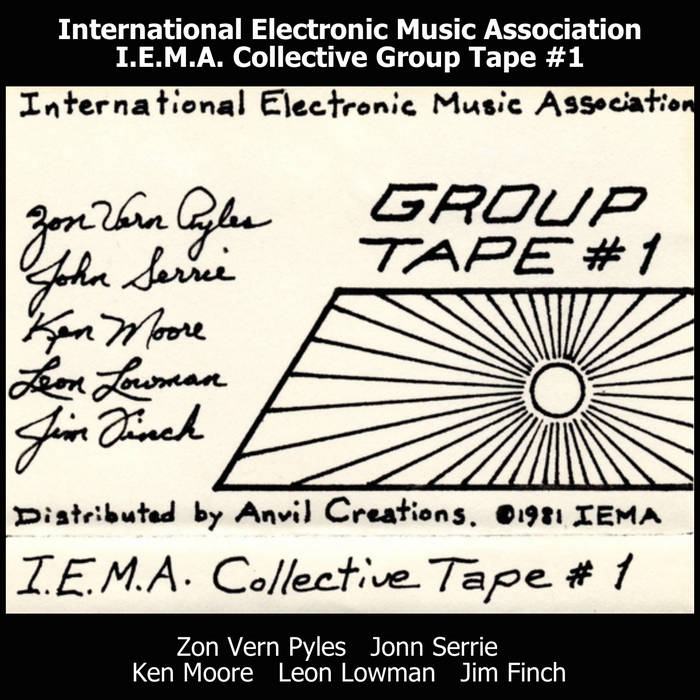 This archival issue of this cassette art classic is authorized by the producer, Ken Moore.
January 29, 2016

Thanks to Brian Lunger for providing scans of the cover, insert, and tape.

The International Electronic Music Association was formed in 1979 by James E. Finch in Salamanca, New York. Jim had a vision, about electronic music, about how synthesizer users all around the world could somehow communicate with one another, and share their ideas and possibly review recordings and even interview musicians who wanted to take their art to a public level. That vision began with a newsletter, which later turned into a zine called SYNE.

Soon after this newsletter began to catch on, with members of amateur and professional musicians signing up, Jim decided he wanted to be able to share the sounds these people were producing, himself included, but there was no internet then, just the postal service. So he gathered some music from several music enthusiasts, myself included, and put together a tape that would be distributed at a fair market price to anyone who wanted to sample these new electronic sounds. It was advertised in SYNE, and the tape was met with great enthusiasm among all the members if the I.E.M.A.!

As Jim Finch had so many responsibilities and wanted to expand the newsletter, at an early meeting of some of the more local members, it was decided that someone else needed to take control of this "Group Tape" project. It was decided, because of the fine quality of my own cassette tapes I had distributed as Anvil Creations, that I would become the new Music Director. The first thing I did was to draw up a cover for this first effort, and some really fine names appeared on this release, including Jonn Serrie, whose name we misspelled, and Leon Lowman, whose records are now available through Vinyl-on-Demand.

This was the beginning of a short series of compilation releases that was met with widespread approval. I hope that you enjoy these recordings, as they have remained dormant for the past 35 years, and certainly deserve the admirable attention that Hal has given to them in this digital format.