The Head of Your Goat, The Son of Your Dog, Vol. 1

by BURDEN OF FRIENDSHIP 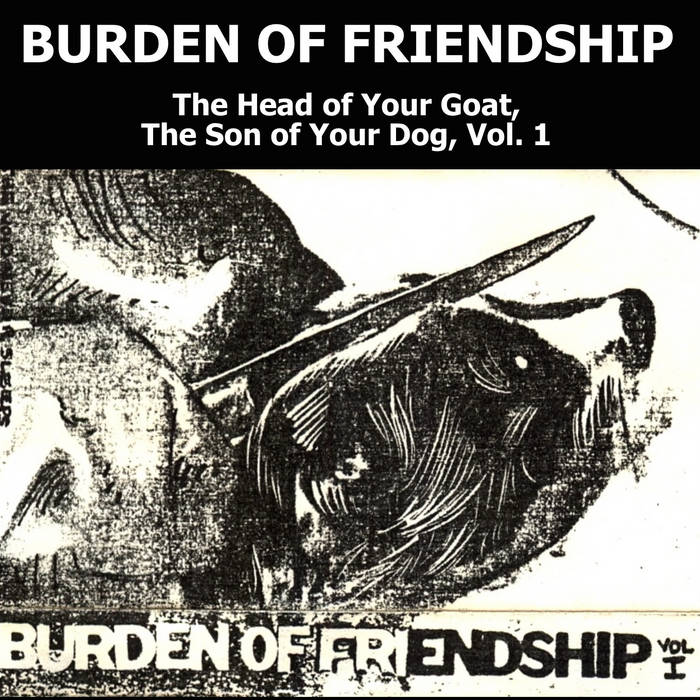 HalTapes presents
BURDEN OF FRIENDSHIP
The Head of Your Goat,
The Son of Your Dog, Vol. 1

This digital archival issue is authorized by Burden Of Friendship.
Digitized by Hal McGee from his personal copy of the cassette, January 2016.

The first noise ensemble in Chicago was probably Burden of Friendship, in the early to mid-eighties. Burden of Friendship would perform at Unarco, an old abandoned steel factory in Evanston, where there were, according to front man Scott Marshall, “enormous decrepit steel tanks [and] all kinds of lengths of pipe” that made the entire factory seem like “one giant instrument.” The ensemble would bleed from huge gashes in the middle of some shows. One time they smashed lit fluorescent light bulbs across Marshall’s back, which makes a fantastic fifties UFO sound, by the way.

Burden of Friendship threw all-night noise parties called Voidwatches at the radio stations they worked at—mostly WZRD, out of Northeastern Illinois University, but also at Northwestern University’s WNUR. They used live fireworks, knocked over file cabinets and made, as Marshall describes it, “other general destruction (busted linoleum flooring, holes in the ceiling).” The radio waves carried the sounds of these nights of mayhem, of a dozen drug-addled miscreants alternating between making noise and manning a soundboard.

Members of the group, many of them DJs at WZRD, included Bill Meehan of Research Defense Squad, Doug Brown (the late “Little Dougie”), Robert St. Clair, James Koehnline, Paul Rosen and Mark Giangrande. According to member Scott Marshall, these early-eighties Voidwatches inspired a generation of noisers, including Daniel Burke (also a WZRD DJ at one point, and the man behind the legendary Illusion of Safety industrial noise outfit), Michael Krause (who later became a longtime DJ at WZRD and also plays under “Death Factory”) and former Sonic Youth member Jim O’Rourke, who has produced records by artists including U.S. Maple, Faust, The Red Krayola and Wilco.

extract from
“Escape from Noise: Is This Not Music?”
by Arvo Zylo
Newcity Music, April 2012

If you like The Head of Your Goat, The Son of Your Dog, Vol. 1, you may also like: