I Think About Jackson Pollock

by Girls On Fire 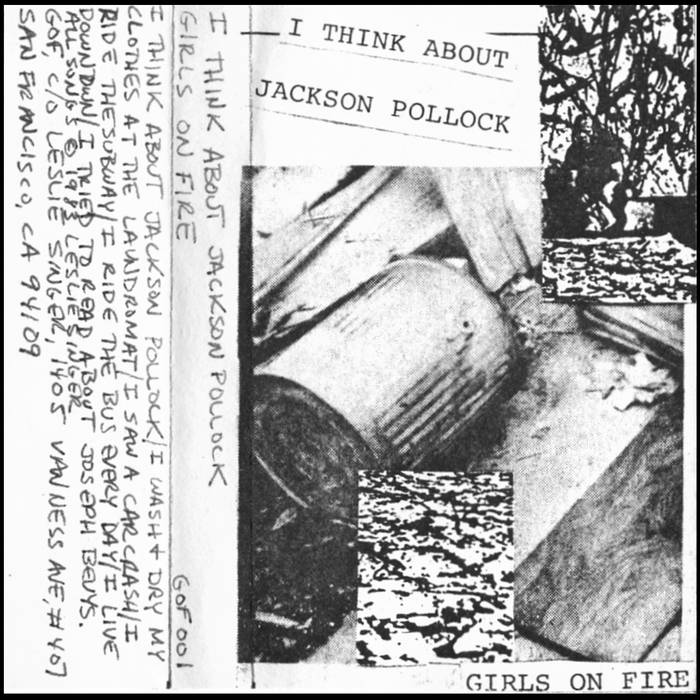 The World you can't leave behind

I THINK ABOUT JACKSON POLLOCK by GIRLS ON FIRE is presented here in an archival reissue version authorized and with the full cooperation of Leslie Singer of Girls On Fire.

In October of 1982 Leslie Singer moved from the Washington, D.C. area (where she had been a member of the earliest incarnation of Psychodrama) to San Francisco. I THINK ABOUT JACKSON POLLOCK was her first solo cassette release under her newly-created moniker of Girls On Fire.

Leslie and I invite you to visit an informational page about I THINK ABOUT JACKSON POLLOCK:
www.haltapes.com/i-think-about-jackson-pollock.html
On that page you will find extensive archaeological evidence including liner notes and a personal history of the tape by Singer, maps, videos, scans of the tape, and more.

Suffice to say, I loved the tape. It seems like Singer couldn't hold back the words and thoughts and images. The subject matter seems to be fairly evenly split between her memories of events, sensations, happenings and things that people said and did back in Virginia and all of the new sensations she was experiencing after having moved to San Francisco. Subject matter includes Jackson Pollock, car crashes, laundromats, riding the city bus, riding the subway, stuff her boss said at her office in San Francisco's Financial District, something about how everybody she knew back home had cancer ... I think there's even something about margarine!

Leslie Singer's five Girls On Fire cassettes in the 1980s incorporated elements of pop, conceptual and performance art; as well as doses of hardcore punk and lo-fi experimentalism; and even contains traces of progressive rock. Her music and films prefigured Harsh Noise and Riot Grrrls. But it's ALL LESLIE. Nobody else sounded like this back then! Her personality and life are stamped all over this!

The audio is taken from a direct transcription from Al Margolis' personal copy of I THINK ABOUT JACKSON POLLOCK that Leslie Singer sent to Margolis in the 1980s.

In addition to the individual songs included here are transcriptions of the entire sides of the cassette so that you can experience the tape sides as continuous listening experiences.